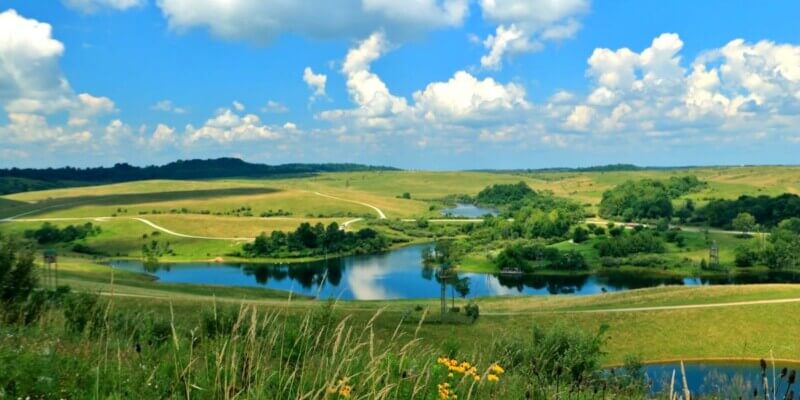 CUMBERLAND, Ohio — I’ve never been on an African safari. Or even to Africa, for that matter. The closest I ever got to what I imagine such an experience must be like came about in mid-July.

That’s when I visited The Wilds, a nearly 10,000-acre enclave that’s a two-hour drive north from Charleston up Interstate-77.

At The Wilds, home to 26 endangered species of wildlife from around the world, the thrills are up close and personal. The animals are free to roam around open range habitats while the visitors ride through the hills and savanna in an open-air vehicle that resembles a bus with the upper half cut off. To shade the riders from the summer sun and possible rain, the vehicle is topped by a sturdy canvas awning.

The Wilds is located on 14 square miles of reclaimed surface-mined land whose coal was extracted in the ’40s, ’50s and ’60s by a subsidiary of the American Electric Power Company. The land was reclaimed starting in the 1970s but, by the look of it now, you’d never believe that it once was pockmarked by craters and lifeless ravines, looking much like the surface of the moon.

Today, more than 200 endangered animals plus hundreds of indigenous species roam freely through the large open ranges, fenced off to keep out unwanted animal intruders. On my safari, the guide told us that the entire habitat is enclosed by a whopping 20 miles of fencing.

Visitors begin their wildlife adventures at the Johnson Visitor Center, perched on the crest of a hill overlooking the conservation park. Before or after the safari, visitors can stroll through the Wilds Butterfly Habitat or stock up on salads, sandwiches and desserts in the Overlook Café.

I actually began my visit with a Zipline Safari Tour that took me along 10 zip-line observation platforms and over the grasslands, grazing animals, lakes and ponds. The 21/2-hour-long zip-line experience is led by experienced guides who point out animals like Pere David’s deer — some of which I saw swimming in the lake — Eld’s deer, red-crowned cranes and herds of Sichuan takins grazing in the grasses.

The zip-line experience finishes with a rappel down from atop a high observation platform to the ground below. Shorter zip-line tours over 5 observation stations and Sunset Zip-line Safari options are also available.

As exciting as the zip-line tours can be, the fun really began for me once I boarded the open-air tram for a 2 1/2-hour-long drive around the grounds. From the safety of my seat, I managed up close looks at animals I’d never before heard of, like Przewalski’s horses — which are native to Mongolia but extinct in the wild — Persian onagers and scimitar-horned oryx.

Most awesome was a mother rhino and her baby sauntering along the road in front of us along with others of her species. But the animal that got the most attention was a curious ostrich that came right up to within touching distance to our vehicle. A word of caution here: Don’t even try to pet the animals. They are wild, and there’s no predicting what they might do.

The cute factor came from a herd of giraffes and a 3-week-old baby that already stood seven feet tall but was dwarfed by its 18-foot tall mother.

One of the stops about halfway through the safari let us out at Spillman Lake, named after the original farm family who once owned the property. We got out and fed pellets of grain we bought to some of the huge catfish that languorously plied through the water. Before reboarding the vehicle, we walked through a small enclosed aviary, home to 130 to 140 Australian budgerigars, green parakeets that like to land on the wrists of those who purchase $1 grain sticks just outside the entrance door.

A second stop at the Carnivore Center gave us a look at cheetahs, capable of running at speeds close to 70 miles per hour; a dhole, which is an Asian wild dog; and a sleeping pack of African painted dogs.

“Guess which is the most dangerous,” asked our guide. As we thought about the answer, he blurted out the truth: the painted dogs.

“They work as a team and are highly successful predators,” he said.

Visitors get to see the carnivores from the safety of raised wooden walkways that rise high over the animal habitat. Sadly, we also learned some of the ominous ecological facts about two of the carnivore species. According to our guide, there were about 100,000 cheetahs in some 44 countries worldwide in the 1900s. Today, only about 10,000 remain in the wild.

In addition to the regular daily tours, The Wilds also offers Sunset Safari Tours, horseback safaris and catch-and-release fishing safaris from the shore of one of the lakes or by boat.

https://www.wvgazettemail.com/life/travel/wv-travel-team-into-the-wilds-ohio-enclave-home-to/article_aeac1a80-1e6a-596b-ace4-aba4e05905f3.html
Dave Zuchowski has been writing about travel for 26 years, and his articles have made the pages of many newspapers and magazines across the country, including AAA Pathfinders, West Virginia Magazine, Southsider, and Westsylvania. He writes for the Herald-Standard Newspaper, based in Fayette County, Pennsylvania.