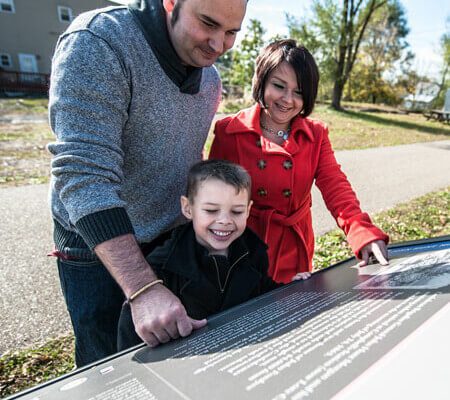 John Hunt Morgan and his Confederate Calvary entered Guernsey County on July 23, 1863. The uninvited guests raided and pillaged the area. Four interpretive signs throughout the county detail their journey. Learn if they escaped or were captured!

In July of 1863, Union victories at both Gettysburg and Vicksburg, convinced the North that the war was nearly won. A determined group of Southern soldiers, however, sought to sow doubt that the South would still prevail.

On July 2, 1863, John Hunt Morgan and his Confederate Cavalry started moving north through Kentucky on a raid that would encompass three states and 950 miles. His 2000 man cavalry entered Ohio on July 13, 1863 spreading fear throughout the villages in Ohio. Scared citizens buried their silver and hid their horses.

Morgan’s men crossed Southern Ohio, while being constantly pursued by Union forces. Morgan’s plan was to cross back into West Virginia near Portland, Ohio at a ford of the river known as Buffington Island. It was here that a battle took place on July 19, 1863. Morgan lost nearly half of his men during the battle, and barely escaped with approximately 700 men remaining.

Morgan and his men entered Guernsey County near sundown on July 23. Worn out from the constant pursuit of Union forces and hours in the saddle, the Southern men sought a brief respite in the village of Cumberland. The uninvited guests visited homes and demanded food and rest. Nearly 100 horses were also either bought or stolen by the Confederates to replace the worn out steeds that they had thoroughly abused. The local population complied with these demands, seeking only to remain uninjured as trepidation spread throughout the region.

By 10pm, the raiders had vacated Cumberland. With the forced aid of local men as guides, they traveled east through Point Pleasant, (now Pleasant City), Hartford, (now Buffalo), and arrived at Senecaville in the early morning hours of Friday, July 24. With reports of Union reinforcement to the east, the raiders turned north towards Campbell’s Station, but not before acquiring more food and horses from residents. Legend has it that Morgan had a strange encounter with a local Union Soldiers wife, the story described by an interpretive marker at this spot.

Near dawn, Morgan and his men arrived at Campbell’s Station, (now Lore City), inflicting the harshest damage of the raid. They burned a bridge, several railcars, a tobacco warehouse and stole nearly 4,000 dollars from a safe. This attack was thought to be retaliation for damages wrecked on Kentucky towns earlier in the war by Laughlin’s Union Cavalry, made up of several Guernsey County men.

From there, the Confederates thundered north to Washington, (now Old Washington), and commandeered meals from the proprietors of the American Hotel. Many of the raiders spread out through town to rest, or ravage the local stores of wares and supplies. One story relates to the women serving Morgan’s men a meal noticed a very young Confederate boy in their ranks. Quietly they stole him away to a safe location, and afterward sent him home to his Southern mother… who thanked the Northern ladies for such a blessing.

This respite proved dangerous for Morgan’s men as Union Cavalry had now arrived at Washington, shelling the city from a hill south of town and attacking the surprised Confederates, Morgan and his men escaped both North and East… to fight another day.

As you travel Guernsey County’s portion of the Morgan Heritage Trail, be sure to stop at the 4 interpretive markers located in Cumberland, Senecaville, Lore City and Old Washington. This great and historical period is well documented along the entire John Hunt Morgan Heritage Trail and these markers serve as your storyteller to these interesting events. Download the brochure.