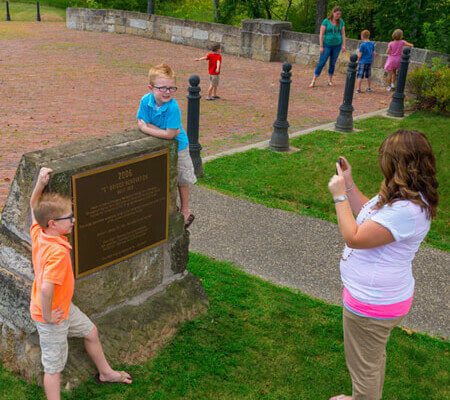 Often billed as “the road that built a nation,” the National Road (Route 40) stretches nearly 700 miles across six states-from Maryland’s seashore to Illinois’ farmland. Thirty-two miles of the road pass through Guernsey County, traveling down the heart of Cambridge along Wheeling Avenue.

Before becoming the iconic road it is today, the National Road began as a simple wilderness footpath connecting Kentucky and Ohio and was used primarily by Native Americans and frontiersmen.

The trail soon became referred to as Zane’s Trace after Ebenezer Zane, who was commissioned by the U.S. Congress in 1796 to begin construction of a connecting wagon route from Zanesville, Ohio, to Wheeling, West Virginia.

The trace quickly grew in size and importance to the expansion of the country westward. In 1806 President Thomas Jefferson signed legislation enabling the construction of the first federally funded national road. The road took nearly 30 years to construct from east to west, reaching completion in Guernsey County in 1828.

It wasn’t long before inns, taverns and other amenities sprung up along the road, catering to the needs of businessmen, politicians, farmers and everyday citizens as they traversed the road at increasing rates.

From the 1820s to the 1840s the road served as the main artery for the country’s commerce east to west until the railroad immerged in the 1850s as the prime mode of transportation for goods and people. It was not until the early 1900s, at the onset of World War I, that the National Road began to regain national attention as the government made it a priority to maintain it and other major highways.

The dawn of the automobile brought new reasons for Americans to travel. As they visited friends and relatives, or took scenic trips, they brought with them the need for new restaurants, service shops, theatres, hotels and more. In the 1960s the road was eclipsed by the creation of Interstate 70, but has since been designated as a national scenic byway and is gaining the attention of travelers once more for those seeking a less hectic driving route. Guernsey County’s rich cultural heritage is reflected in the historic architecture and agricultural scenery. Antique shops, locally operated restaurants and attractions, and inns along Route 40 enhance the experience of traveling this historic highway.

The National Road offers adventure seekers today a great road trip just as it did two centuries ago. More than 25 key attractions, points of interests and interpretive signs, specific to the history of the road, are located throughout the county. From the famous “S” bridges to stagecoach stops and tollgates, the route is lined with picture perfect sites.